At Founders’ Day on Thursday, Community Foundation for the Alleghenies President Mike Kane reported that the Foundation has grown to a record $78 million in estimated year-end assets over the past fiscal year. The Foundation also grew to 745 funds and awarded more than $6.2 million in grants and charitable distributions.

“On behalf of the community, we’re very pleased to report this record asset level,” Kane said. “But we’re even more pleased to announce more than $6.2 million in grants to make our community stronger.”

Held at Community Foundation for the Alleghenies Oilhouse at PNG Park, the event showcased the Foundation’s role in supporting the region’s growing trail networks. Over the past decade, CFA has awarded around $250,000 in direct grants to support local trails. Many of those grants helped secure millions of dollars in state and federal funding for trail-related projects and conservation efforts, Kane said.

“We believe trails make communities better,” he said. “And it’s a great example of what the Community Foundation strives to do in partnership with our donors. We work every day to make connections. We build paths that connect donors to their dreams for their legacy, their families, and our communities.” 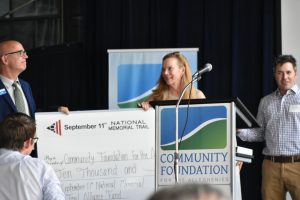 “Completing the September 11th National Memorial Trail is of utmost importance for all of the communities in which we work,” Baxter said. “We’re proud to be a partner with Community Foundation for the Alleghenies to make sure this resource is not only developed but also maintained for the public in perpetuity.”

The Rewards of Giving Back

Save on Estate Planning Services