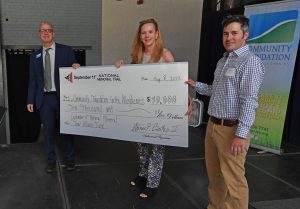 “Completing the September 11th National Memorial Trail is of utmost importance for all the communities in which we work,” Baxter said. “We’re proud to be a partner with Community Foundation for the Alleghenies to make sure this resource is not only developed but also maintained for the public in perpetuity.”

Baxter was the guest speaker for CFA’s Founders’ Day on Aug. 8. At the event, he and board representatives presented $10,000 in seed money for the new fund. Click here for details or to donate to the fund.

Alliance members also have organized an upcoming event, the 911 Trail Challenge. Click here for details or to register.