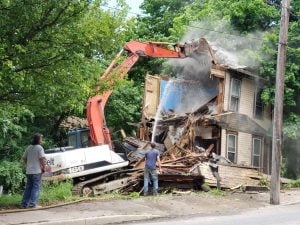 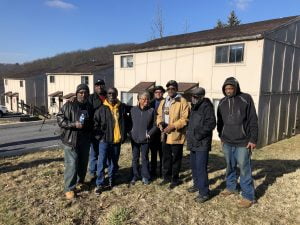 Altogether over the past two years, the Foundation has made a major commitment of more than $1.3 million toward blight eradication in the Johnstown area.

Neighborhoods are being transformed, thanks to efforts to demolish long-blighted properties and eyesores in key Johnstown areas.

This spring, CFA announced $657,000 in funding made possible through CFA’s Fund for the Future to target at least 50 blighted structures in Prospect, Kernville, and Hornerstown, including rows of buildings sometimes referred to as the “box houses” along William Penn Avenue in Prospect.

Other buildings, selected for their high visibility and dangerous conditions, were to be removed from high-traffic areas of Kernville and Hornerstown. Though the pandemic created an unavoidable pause in the availability of demo crews, the Johnstown Redevelopment Authority (JRA) began work again as soon as possible this summer. By mid-August, more than half of the properties had been razed, and JRA Executive Director Melissa Komar said neighbors, visitors, and business owners already were noticing the change.

The work is in addition to another blight removal project in Johnstown’s West End neighborhood, which was completed in July. That work improved a key gateway to the city and involved $75,000 from CFA’s Community Initiative Fund, which matched $75,000 provided through another CFA fund. The 1889 Foundation added another $150,000 to the work, culminating in $300,000 to revitalize the West End by removing 17 dangerous eyesores and replacing them with greenspaces, which already have catalyzed private property improvements by neighbors and local businesses.

At CFA’s Founders’ Day Celebration in August, CFA President Mike Kane announced an additional $500,000 donation to fight blight. In fiscal year 2021, that funding will be put to use in Johnstown’s Cambria City, Minersville, Woodvale, Moxham, and Old Conemaugh Borough neighborhoods, and it furthers the positive momentum happening in our city and region, providing immediate and long-term improvements for our community.

Altogether over the past two years, the Foundation has made a major commitment of more than $1.3 million toward blight eradication in the Johnstown area, and this includes support for leveling, seeding, and, at higher-visibility sites, installing wooden fencing and ornamental grasses. Those beautification steps are set to begin in late 2020.