You are here: Home / News / Paying it Forward 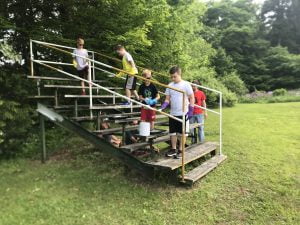 Patton Park recently underwent some major upgrades, thanks to lots of folks from the community lending a hand and a Fall 2019 grant from CFA. Scroll down for a photo gallery.

Funded through a $2,500 CFA grant awarded last fall, one improvement at the Patton Park this summer has sparked a chain reaction of community service. The result is a park that attracts more visitors and offers a safe, clean environment for families and source of pride for the community.

Members of the Restore 814 Fund, a collaborative community initiative to enhance recreational and educational opportunities, applied for one of CFA’s Fall 2019 grants to restore a full-length basketball court and smaller supplemental courts at Patton Park.

The courts had fallen into disrepair, with cracks that were almost too severe to fix. The upgrades, which began this summer, happened in the nick of time. Work began this summer, Restore 814 founders Nate and Lauren Wharton said.

“We started this to get some positive momentum around the park,” Nate said.

The courts were resealed and then folks pitched in to sand, prime, and repaint the poles. Through another grant from Pennsylvania Skill and Miele Manufacturing, the baseball fields got the next upgrade. A local contractor, Kosicki Construction, offered equipment and time to put in a sand infield. Photos of the work in progress started popping up on social media, and one day Nate and Lauren went to the park and found local kids working hard on the tee ball bleachers at a field where they once played. They’ve since moved on to little league.

“It was a good moment to talk to them about leaving things better than you found them,” he said. “Now the field they’re leaving behind is much better than the one they played on. They got to pay it forward.”

It was a good moment to talk to them about leaving things better than you found them.

Patton Mayor Jonathan Welchko came out one day to power wash the tennis courts and others have pitched in any way they can. Volunteers even came out from other towns.

Lauren said locals are hoping this provides a positive spin-off for the community in many ways, including increased rentals of pavilions and more visitors to town. The pool facilities were improved and will now be open through the summer, too.

“Beautifying the park in small chunks helps bring money to town,” Lauren said. “It just looks like a brand new park. You draw in people to play basketball and they stay to play at the pool or decide to have a family reunion. With all of these efforts, it’s definitely keeping people at the park and bringing new people in.”

To find out more or make a donation to Restore 814, click HERE.