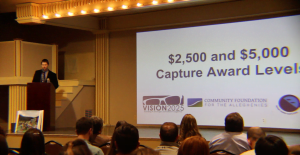 The Capture Awards provide funding to assist our volunteer-based groups, known as capture teams, in completing projects throughout the community.  Capture Awards have empowered volunteers to create everything from public art and trails to greenspace and entrepreneurial development. Since launching in 2016, nearly $15,000 has been distributed to over fifteen teams.

This grant program is a collaboration among the Community Foundation for the Alleghenies, Discover Downtown Johnstown, and Vision2025.

For a limited time, two new levels of Capture Awards are available in the amounts of $2,500 and $5,000. These new levels will be the highest awards offered in the program’s lifetime. Vision2025 will distribute a minimum of $25,000 in this next round of funding, primarily as $500 and $1,000 grants.

“The Capture Awards have proved incredibly successful in accelerating Vision2025 team projects, and we are very excited to see the innovative proposals from capture teams for these new award levels,” Vision2025 project coordinator Ryan Kieta said.

Angie Berzonski, Program and Communications Officer for the Community Foundation, added, “The Community Foundation is well-known for its support of long-established nonprofits, and that remains an important focus for us. But the Capture Awards are a way we can encourage some new and exciting projects that just need a little kick-start to really catch on. The applications for these awards come from capture teams that have been working as part of the Vision2025 process, so we know they have a committed team behind them. For these new award levels, the evaluation panel will really be looking for highly visible and inventive outcomes.”

The application period is open through February 28, 2018.  Visit the Vision2025 website to apply, and to find out more about starting your own crew. Capture teams may contact project coordinators Wally Burlack or Ryan Kieta at (814) 535-8675 for assistance.

Somerset Campaign Lets us All Leave a Legacy#SomersetCountyGives Campaign Launch

Locust Park Dedicated in Honor of Leo and Stella Cakouros