Johnstown, Pennsylvania represents a lot of things to outsiders looking in, most of which are not how locals choose to define their historic city: a small rust belt city riddled with blight; a shrinking city, suffering from the outward flight of its young people; a snapshot of rural America, where high poverty rates and a focus on the past have hindered socio-economic progress.

It’s not where you’d expect to find a model for combining environmental stability with economic growth — but that’s exactly what’s happening here.

This recently released study shows it pays to clean up the environment. The Foundation for Pennsylvania Watersheds (FPW) looked at the Little Conemaugh Watershed, located just northeast of Johnstown, PA, and found 150% return on investment for detoxifying local rivers and denuded landscape.

As Johnstown reawakens its economy in the wake of plant closures and the reality of the new global economy, environmental restoration and outdoor recreation offer pathways to prosperity. Ten years ago, this wouldn’t have been possible.

Prior to 1977 and the passage of the Surface Mining Control and Reclamation Act (SMCRA), Johnstown and many areas throughout the nation served as natural resource centers fueling the Industrial Revolution and two World Wars. During that time, environmental regulations were not the focus—prosperity and victory was. That past neglect, over time, left behind countless scars on the landscape and a bright orange flowing reminder of how our waterways have been impacted. But within the last two decades, funding from the Foundation for Pennsylvania Watersheds, combined with local and state partnerships, plus federal funding through the Department of Environmental Protection and the Bureau of Abandoned Mine Reclamation, has proven successful in making the land once again usable. The local economy is seeing a correlative bounce.

Creative collaborations here also showcase the mining industry as an active participant in mending the scars of their predecessors, taking the mining companies from environmental villains to environmental superheroes. Rosebud Mining Company has assumed cleanup costs for the now-defunct St. Michael mine pool discharge, allowing Rosebud to profitably mine a coal seam downstream. This project will invest $31 million in the local economy, including $16 million in construction costs and a $15 million trust fund to cover ongoing water treatment. Rosebud will continue mining, and will facilitate cleanup for one of the worst mine discharges within the Little Conemaugh. 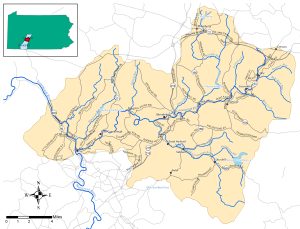 The Little Conemaugh study shows us the necessity of continuing conservation efforts, while a separate study reminds us how far we can fall if we fail to keep it up. The nearby Stonycreek River, south of Johnstown, used to run orange with thick iron muck. Now it runs clear, the result of tens of millions of dollars and years of treatment. Now, on a sunny day, the river attracts kayakers, river surfers, and fishers. But it requires ongoing management, and with no trust fund for future operations, the Stonycreek runs the risk of once again becoming a polluted tragedy. This analysis shows what would happen to the local economy if that were to happen — and it’s not good.

These two reports put Johnstown at the forefront of rust-belt communities considering economically and environmentally sustainable futures. The Foundation for Pennsylvania Watersheds, along with support from the Community Foundation for the Alleghenies, has pieced together hundreds of millions of dollars in federal, state, and local funding for initiatives scattered throughout the Johnstown region, and successfully advocated to transform two local waste sites through the federal AML Pilot Program. Now we have collaborative examples that prove what conservationists have known all along: restoring our landscapes to their natural glory provides riches both measurable and intangible — improved physical and mental health for those who spend time outdoors, increased property values near cleanup sites, and business opportunities related to tourism and outdoor recreation. Investing in natural resources has a priceless return.

Beyond the economic benefits, this revitalization points to Johnstown’s evolution toward a city that can shed past environmental degradation while carrying the best of its legacy into an innovative tomorrow.