You are here: Home / News / Honoring a War Hero

JOHNSTOWN — Lt. Col. Boyd “Buzz” Wagner was the first Ace of World War II from the Johnstown area and earned several distinguished flying medals and honors before he was killed in a training exercise in 1942.

Members of the local Buzz Wagner Chapter of the Air Force Association have been trying to raise money to bring a replica of a P-40 Plane to the Johnstown-Cambria County Airport in his memory. That’s the same plane Wagner flew during several successful missions in World War II. He was nicknamed “Buzz” because it was said he could buzz the camouflage off a hangar roof.

Bill Burns, the association’s chapter president, said Wagner was attacked by five enemy planes and shot down four of them, and that was not his only successful mission. His legacy of bravery and heroism is why Burns and others are trying to keep his memory alive for generations to come.

“He was the first Ace of the Second World War and he’s our hometown hero,” said Burns.

Members of the association said 26-year-old Wagner was killed in a training exercise in 1942. Some of his remains were found about six weeks later, although the cause of the crash is unknown. Wagner’s partial remains were returned to Johnstown for burial. An estimated 15,000 mourners attended his funeral at Grandview Cemetery in January 1943. Both Time and Life magazines covered the event.

Thanks to a grant from the Foundation, a matching donation from Bob Eyer, and other donations from throughout the community, the Air Force Association is nearly ready to bring the replica of the P-40 Plane to the Johnstown-Cambria County Airport to honor Wagner and keep his memory alive. To help support this project, click here: Buzz. 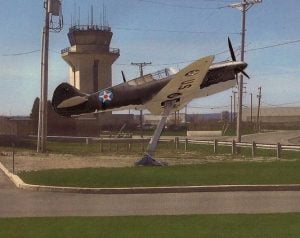