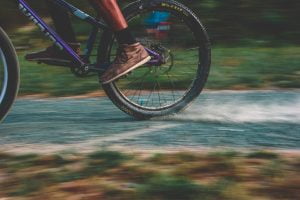 Today, outdoor enthusiasts have another reason to celebrate the region.

Quemahoning Trails project partners officially opened a 17-mile bicycle trail that encircles Quemahoning Reservoir, an important step toward building on recreational opportunities in the region and making the area a destination for thrill-seeking visitors. The Cambria-Somerset Authority and Stonycreek-Quemahoning Initiative were among more than a dozen partners who joined a grand opening of the first loop of the Quemahoning Trails.

Adventure downhill trails opened recently on the Inclined Plane hillside in downtown Johnstown, so there are now four mountain cycling areas in Cambria County and five in the Laurel Highlands. The Que Trail was designed by Clark Fisher of FisherWorks Consulting, who also designed Allegrippis Trails at Raystown Lake; Allegrippis Trails are now the third largest destination for mountain bicyclers from the Northeastern United States, according to Single Tracks magazine.

Last year, Community Foundation for the Alleghenies announced that support from an anonymous donor, combined with support from other Foundation funds, would allow Stonycreek-Quemahoning Initiative Inc. to complete the 17-mile mountain bike loop. The project was funded by 27 separate grants or donations totaling $132,175, with the Community Foundation for the Alleghenies as the largest contributor. The new trail is another example of how the Foundation connects donors with meaningful projects, Foundation President Mike Kane said.

“We work hard to understand what our donors envision, and we connect their interests with projects that are effective and bring our whole community forward,” he said.

CFA donors have seen the value of the region’s trails and their support is one of the reasons so many trail connections are happening now and in the near future. Over the past decade, Community Foundation for the Alleghenies has awarded nearly $250,000 in direct grants to support the region’s growing trail systems. Many of these grants helped leverage millions of dollars in state and federal funding for trail-related projects and conservation efforts.

Find out more about the region’s trail progress at CFA’s Founders’ Day event on Aug. 8. Click here for tickets.